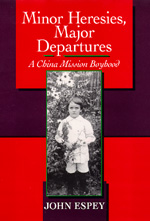 An American boy, son of Presbyterian missionaries, was born in Shanghai early in this century. The boy lived two lives, one within the pious church compound, the other along the canal and in the alleys of a traditional Chinese city. There he faced the alley brats' Lady Bandit, heard the shrill screams of a child's foot-binding, learned rank obscenities from passing boatmen, and, while still in short pants, chewed Sen-Sen and ogled snake-charmers in the old Native City. He sailed up the Yangtze to attend boarding school, and along with his Boy Scout patrol, met Chiang Kai-shek. And when John Espey grew up, he wrote about his years in China.

This memoir is the story of those years, and while it is a wry, affectionate account, it also conveys an often overlooked picture of China in the years before communism. Seen through the eyes of a child, the interplay of religion, commerce, and American colonialism that took place during this period is revealed more tellingly—and more lightheartedly—than in many an analysis by an "old China hand."

Espey's bent is to use a "Chinese" approach to his subject, that is, to hide a second meaning within his words, to speak in parables. This he learned from both his single-minded missionary father and the family's Chinese cook. The result is that the reader of Minor Heresies, Major Departures will learn a great deal about the Pacific Rim while having a rollicking good time.

John Espey (1913–2000) was a novelist, memoirist and literary scholar, and Professor Emeritus of English at the University of California, Los Angeles. In 1990, Espey's Strong Drink, Strong Language received a nomination for the National Book Critics Circle Award.

"This is a gentle memoir evoking the simple pleasures of Espey's youth, his sense of being influenced simultaneously by the Chinese culture and by the Presbyterian ethic of his parents. . . . Espey's sensitive perceptions evoke a vivid contrast between the earthy, practical Chinese and Shanghai's isolated foreign community during the era between the Boxer Rebellion and the Japanese invasion. . . . [A] droll and graceful memoir.—Publishers Weekly

"His humorous and witty memoir, replete with satirical but good-natured comments about Presbyterian missionaries, consists of various short essays, most of which originally appeared in whole or in part in Harper's and The New Yorker. These piecemeal biographical sketches, produced over a span of 50 years, are grouped together according to a clear chronological time frame, within a definite geocultural setting, and with a central thematic concern. Taken as a whole, they offer an insightful and charming undocumented history of China at the beginning of the century, revealed through the eyes of a boy. Highly recommended for all libraries."—Library Journal

"John Espey writes of his boyhood days in China with irony and slicing wit, a sort of Tom Sawyer and the missionaries, compassionate and yet honestly critical, and always mindful of the ways that human nature both undermines and uplifts us."—Amy Tan


"These memoirs are fascinating and entertaining, but the reader should be warned: Look out! If you read this book you will fall in love with the author."—Ursula K. Le Guin

"Surely Espey must be the only writer in the world who could produce high comedy about Presbyterian missionaries without in any way jeering at their sense of dedication."—Robertson Davies

"Timelessly charming, John Espey is as witty as he is wise. And what a joy to hear his urbane and infinitely civilized voice."—Alice Adams

"Written with grace and infused with understated insight. . . . a leisurely journey to a time and place accessible only through the careful memory of a uniquely qualified and generous guide."—Michael Dorris

"These delightful classics seem especially fresh and meaningful today, perhaps even more than when they were published. Drawn with exceptional charm and acuity, they picture the intersection of two cultures—those of the Chinese, and the missionary parents, from the point of view of the lively children caught between, who could see and question what was good and bad in each, rather as today we sense the problems in our own worlds, and the things we have to learn from the East."—Diane Johnson
Read More >