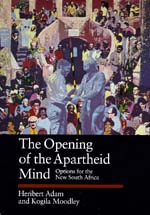 Refusing to be governed by what is fashionable or inoffensive, Heribert Adam and Kogila Moodley frankly address the passions and rationalities that drive politics in post-apartheid South Africa. They argue that the country's quest for democracy is widely misunderstood and that public opinion abroad relies on stereotypes of violent tribalism and false colonial analogies.

Adam and Moodley criticize the personality cult surrounding Nelson Mandela and the accolades accorded F. W. de Klerk. They reject the black-versus-white conflict and substitute sober analysis and strategic pragmatism for the moral outrage that typifies so much writing about South Africa. Believing that the best expression of solidarity emanates from sympathetic but candid criticism, they pose challenging questions for the African National Congress and Nelson Mandela. They give in-depth coverage to political violence, the ANC-South African Communist Party alliance, Inkatha, and other controversial topics as well.

The authors do not propose a solution that will guarantee a genuinely democratic South Africa. What they offer is an understanding of the country's social conditions and political constraints, and they sketch options for both a new South Africa and a new post-Cold War foreign policy for the whole of southern Africa. The importance of this book is as immediate as today's headlines.

Heribert Adam is Professor of Sociology at Simon Fraser University in Vancouver. His books include Modernizing Racial Domination (California, 1971) and also with Kogila Moodley, South Africa Without Apartheid (California, 1986). Kogila Moodley is Associate Professor in the Department of Social and Educational Studies at the University of British Columbia. She is editor and co-author of Race Relations and Multicultural Education (1984).