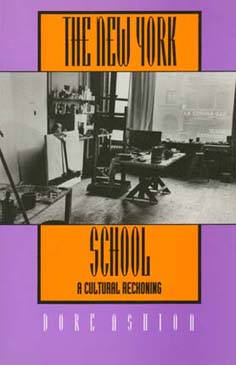 With the emergence of Abstract Expressionism after World War II, the attention of the international art world turned from Paris to New York. Dore Ashton captures the vitality of the cultural milieu in which the New York School artists worked and argued and critiqued each other's work from the 1930s to the 1950s. Working from unsifted archives, from contemporary newspapers and books, and from extensive conversations with the men and women who participated in the rise of the New York School, Ashton provides a rich cultural and intellectual history of this period. In examining the complex sources of this important movement—from the WPA program of the 1930s and the influx of European ideas to the recognition in the 1950s of American painting on an international scale—she conveys the concerns of an extraordinary group of artists including Willem de Kooning, Jackson Pollock, Ad Reinhardt, Philip Guston, Barnett Newman, Arshile Gorky, and many others. Rare documentary photographs illustrate Ashton's classic appraisal of the New York School scene.

Dore Ashton is Professor of Art History at The Cooper Union, New York, and the author of many books on modern art.