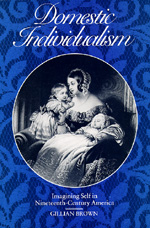 Gillian Brown's book probes the key relationship between domestic ideology and formulations of the self in nineteenth-century America. Arguing that domesticity institutes gender, class, and racial distinctions that govern masculine as well as feminine identity, Brown brilliantly alters, for literary critics, feminists, and cultural historians, the critical perspective from which nineteenth-century American literature and culture have been viewed.

In this study of the domestic constitution of individualism, Brown traces how the values of interiority, order, privacy, and enclosure associated with the American home come to define selfhood in general. By analyzing writings by Stowe, Hawthorne, Melville, Fern, and Gilman, and by examining other contemporary cultural modes—abolitionism, consumerism, architecture, interior decorating, motherhood, mesmerism, hysteria, and agoraphobia—she reconfigures the parameters of both domesticity and the patterns of self it fashions. Unfolding a representational history of the domestic, Brown's work offers striking new readings of the literary texts as well as of the cultural contexts that they embody.

Gillian Brown is Associate Professor of English at the University of Utah.

"A fine book that is sure to provoke interesting debates. . . . Paying close attention to the implications of gender and domesticity for American notions of individualism, Brown draws upon new questions of method and theory to provide fresh readings of canonical texts."—Elizabeth Fox-Genovese, author of Feminism without Illusions

"Brown has fascinating and original things to say about a phase of American literature and culture that has now returned to the center of the Americanist agenda. Her work displays a dense knowledge of cultural sources . . . and an imaginative grasp of how literary and paraliterary texts might intersect."—Richard Brodhead, author of The School of Hawthorne

Part Two: Hawthorne's Gothic Revival
3. Women's Work and Bodies in The House of the Seven Gahfrs
4. The Mesmerized Spectator

Part Three: Melville's Misanthropy
5. Anti-sentimentalism and Authorship in Pierre
6. The Empire of Agoraphobia