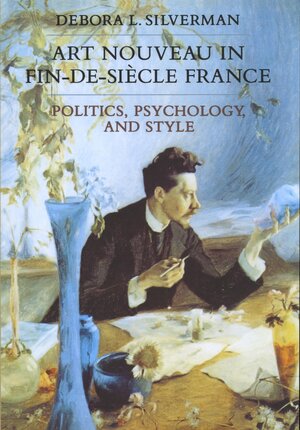 Art Nouveau in Fin-de-Siecle France: Politics, Psychology, and Style explores the shift in the locus of modernity from technological monument to private interior. It examines the political, economic, social, intellectual and artistic factors, specific to late 19th century France, that interacted in the development of art nouveau.

"Explores the highly complex patterns of political pressures, cultural and intellectual formations, and creative initiatives which underlie this period; it moves purposefully between medical and art history, via social or diplomatic or museum history, as the intricately interlocking arguments require."—Times Literary Supplement

"Ever so rarely a book appears that is destined to establish new parameters for intellectual discourse as it challenges and dissects old views through its interpretations. Art Nouveau inFin-de-Siecle France: Politics, Psychology, and Style by Debora Silverman is such a work. . . . Undoubtedly, this superb volume will become an essential text on turn-of-the-century art and its social implications."—Art Journal

"The sophisticated interdisciplinary nature of Silverman's work should make it of interest to political, social, intellectual, and feminist historians, not to mention art historians; but at the same time, it illustrates the very fluid boundaries separating these disciplines."—Nineteenth Century Studies

"A rich, fascinating, and detailed study. . . . The work is a courageous foray, an attempt at real cultural history in a field too often given over to mere gasps of admiration with little intellectual effort."—Art History

"An intricate and rich work. . . . In short, an absolute tour de force, a 'compleat' history of the sort historians are constantly talking about and rarely producing. . . . No reader who makes the effort will end up less than what the French call ebloui—blown away.—Milwaukee Journal

"Debora Silverman has produced a work of great originality, weaving the seemingly disparate strands of French Republican politics, the New Psychology, and the vanguard stule of the fin de siecle into a coherent but complex and multilayered intellectual tonality . . . Art Nouveau in Fin-de-Siecle France represents the new cultural history at its invigorating and provocative best."—Linda Nochlin, Yale University
Read More >