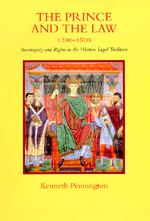 The Prince and the Law, 1200-1600 Sovereignty and Rights in the Western Legal Tradition

The power of the prince versus the rights of his subjects is one of the basic struggles in the history of law and government. In this masterful history of monarchy, conceptions of law, and due process, Kenneth Pennington addresses that struggle and opens an entirely new vista in the study of Western legal tradition.

Pennington investigates legal interpretations of the monarch's power from the twelfth to the seventeenth century. Then, tracing the evolution of defendants' rights, he demonstrates that the origins of due process are not rooted in English common law as is generally assumed. It was not a sturdy Anglo-Saxon, but, most probably, a French jurist of the late thirteenth century who wrote, "A man is innocent until proven guilty."

This is the first book to examine in detail the origins of our concept of due process. It also reveals a fascinating paradox: while a theory of individual rights was evolving, so, too, was the concept of the prince's "absolute power." Pennington illuminates this paradox with a clarity that will greatly interest students of political theory as well as legal historians.

Kenneth Pennington is Professor of History and Law at Syracuse University. Among his previous books is Popes and Bishops: The Papal Monarchy in the Twelfth and Thirteenth Centuries (1984).

"A work of synthesis that at the same time introduces new material to the treasury of studies on medieval political thought."—Stanley Chodorov, University of California, San Diego

"Specialists will find it not merely interesting, but exciting and significant."—Robert L. Benson, University of California, Los Angeles