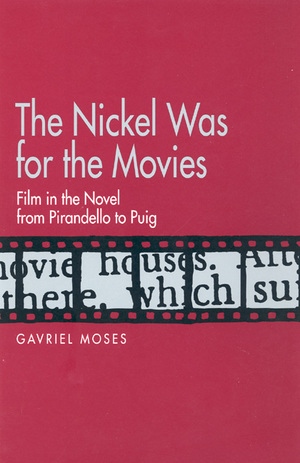 The cinephobic novelist who complains to Fitzgerald's tycoon that he will never get the hang of scriptwriting wouldn't give a nickel for the movies. Yet never before the appearance of film had human perception been engaged in such an all-encompassing way by a single art form. In this ambitious investigation of a little-studied narrative genre, Gavriel Moses defines and explores "the film novel," a literary text in which cinema provides the thematic, formal, psychological, and philosophical center. Through close readings of works by the major representatives of the genre—Pirandello, Nabokov, Isherwood, West, Fitzgerald, Moravia, Percy, Puig—Moses develops a suggestive theory of novels that use literature to investigate the central role that film has acquired in human experience.

These novels, because of their fascination with filmmaker and spectator alike, and because they anticipate current views of the questions of cinema, remain a tangible presence within the repertoire of literary modernism. Offering insightful discussions of Laughter in the Dark, Lancelot, Kiss of the Spider Woman, and other film novels, Moses shows the depth of the exchange between literature and cinema and illustrates the extent to which the way we tell stories with words has been affected by the movies. His book will be of wide interest to literary scholars, film historians, and students of cinema and the novel.

Gavriel Moses is Associate Professor in the Department of Italian and the Program in Film Studies at the University of California, Berkeley.