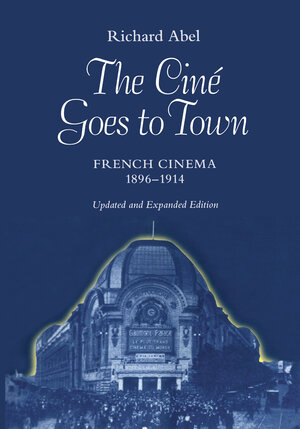 Richard Abel's magisterial new book radically rewrites the history of French cinema between 1896 and 1914, particularly during the years when Pathé-Frères, the first major corporation in the new industry, led the world in film production and distribution. Based on extensive investigation of rare archival films and documents, and drawing on recent social and cultural histories of turn-of-the-century France and the United States, his book provides new insights into the earliest history of the cinema.

Abel tells how early French film entertainment changed from a cinema of attractions to the narrative format that Hollywood would so successfully exploit. He describes the popular genres of the era—comic chases, trick films and féeries, historical and biblical stories, family melodramas and grand guignol tales, crime and detective films—and shows the shift from short subjects to feature-length films. Cinema venues evolved along with the films as live music, color effects, and other new exhibiting techniques and practices drew larger and larger audiences. Abel explores the ways these early films mapped significant differences in French social life, helping to produce thoroughly bourgeois citizens for Third Republic France.

The Ciné Goes to Town recovers early French cinema's unique contribution to the development of the mass culture industry. As the one-hundredth anniversary of cinema approaches, this compelling demonstration of film's role in the formation of social and national identity will attract a wide audience of film scholars, social and cultural historians, and film enthusiasts.

Richard Abel is National Endowment for the Humanities Professor of English at Drake University. His books include French Cinema: The First Wave, 1915-1929 (1984), winner of the Theatre Library Association Award, and French Film Theory and Criticism: A History/Anthology, 1907-1939 (1988), winner of the Jay Leyda Prize in Cinema Studies.