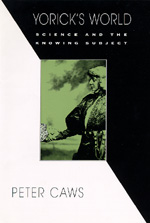 Peter Caws provides a fresh and often iconoclastic treatment of some of the most vexing problems in the philosophy of science: explanation, induction, causality, evolution, discovery, artificial intelligence, and the social implications of technological rationality.

Caws's work has been shaped equally by the insights of Continental philosophy and a concern with scientific practice. In these twenty-eight essays spanning more than a quarter of a century, he ranges from discussions of the work of French philosopher Gaston Bachelard, to relations between science and surrealism, to the concept of intentionality, to the limits of quantitative description. A lively mix of history, theory, speculation, and analysis, Yorick's World presents a vision of science that includes human history and social life. It will interest professional philosophers and scientists, and at the same time its directness will make it readily accessible to nontechnical readers.

Peter Caws is University Professor of Philosophy at George Washington University. Among his recent books are Sartre (1984), and Structuralism: The Art of the Intelligible (1988).

"These essays are the work of a genial, literate mind exploring a wide range of issues mainly centered on the philosophy of science and epistemology, but including considerations of literature, language, and social practice. Caws's work, in general, represents an independent and alternative current in the philosophy of science, one which is informed by a broader conception of scientific thought and activity than are the usual approaches of either the traditional logical-empiricists or the more recent post-positivists. And he has a knack for deflating the latest fashionable claims early in the game, even before fashion has set in."—Marx Wartofsky, Editor, The Philosophical Forum