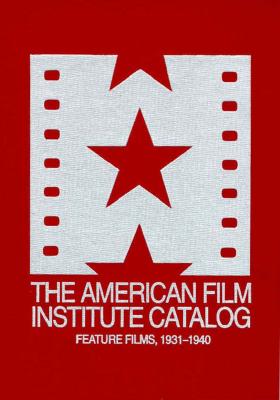 The American Film Institute Catalog easily surpasses all other reference works in its field for comprehensiveness, reliability, and utility. Its decade-by-decade, exhaustive, detailed, and carefully descriptive coverage is simply not approached by any other source. In a field bedevilled by quickly assembled and slipshod reference books, the AFI Catalog volumes are the one essential purchase for every library's film reference shelves, and individual researchers will also find them indispensable.

Following the recently published set of volumes on the teen decade, the AFI research staff has now completed this far more massive set on the thirties—reaching into a period where many films have survived, many of them easily available and much beloved by film enthusiasts.

For the thirties, the improved methodology developed for the teens is deployed in three vast volumes. Hundreds of films never before identified are included, on the basis of new preservation efforts. Extensive coverage is given to Spanish- and other foreign-language films, to foreign versions produced in the U.S., and to coproductions. Surprisingly, independent films figure largely; in some years, out of 500 films produced, 150-200 were independents—works of special social and cultural significance.

"The source of last resort for finding socially valuable . . . films that received such scant attention that they seem 'lost' until discovered in the AFI Catalog."—Thomas Cripps

"Endlessly absorbing as an excursion into cultural history and national memory."—Arthur Schlesinger, Jr.