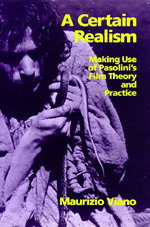 A Certain Realism Making Use of Pasolini's Film Theory and Practice

Pier Paolo Pasolini (1922-1975) was arguably the most complex director of postwar Italian cinema. His films—Accattone, The Canterbury Tales, Medea, Saló—continue to challenge and entertain new generations of moviegoers. A leftist, a homosexual, and a distinguished writer of fiction, poetry, and criticism, Pasolini once claimed that "a certain realism" informed his filmmaking.

Focusing on the personal and expressionistic dimensions of Pasolini's cinema, Viano also argues that homosexuality is present in the films in ways that critics have thus far failed to acknowledge. Sure to generate controversy among film scholars, Italianists, and fans of the director's work, this accessible film-by-film treatment is an ideal companion for anyone watching Pasolini's films on video.

Maurizio Viano is Associate Professor of Italian at Wellesley College.

"Superb. . . . In its careful handling of the biographical and the autobiographical, the factual and the speculative, this book will become a model for how studies of individual directors should be done in the future."—Peter Brunette, author of Roberto Rossellini