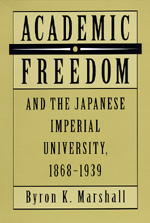 Byron K. Marshall offers here a dramatic study of the changing nature and limits of academic freedom in prewar Japan, from the Meiji Restoration to the eve of World War II.

Meiji leaders founded Tokyo Imperial University in the late nineteenth century to provide their new government with necessary technical and theoretical knowledge. An academic elite, armed with Western learning, gradually emerged and wielded significant influence throughout the state. When some faculty members criticized the conduct of the Russo-Japanese War the government threatened dismissals. The faculty and administration banded together, forcing the government to back down. By 1939, however, this solidarity had eroded. The conventional explanation for this erosion has been the lack of a tradition of autonomy among prewar Japanese universities. Marshall argues instead that these later purges resulted from the university's 40-year fixation on institutional autonomy at the expense of academic freedom.

Marshall's finely nuanced analysis is complemented by extensive use of quantitative, biographical, and archival sources.

Byron K. Marshall is Professor of Japanese History at the University of Minnesota and the author of Capitalism and Nationalism in Prewar Japan: The Ideology of the Business Elite, 1868-1941 (1967).