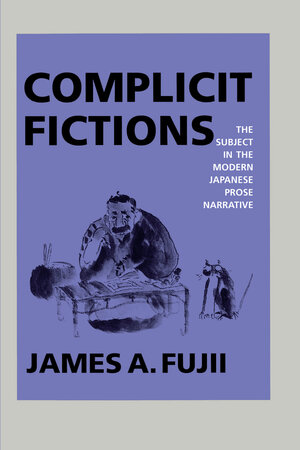 Complicit Fictions The Subject in the Modern Japanese Prose Narrative

In Complicit Fictions, James Fujii challenges traditional approaches to the study of Japanese narratives and Japanese culture in general. He employs current Western literary-critical theory to reveal the social and political contest inherent in modern Japanese literature and also confronts recent breakthroughs in literary studies coming out of Japan. The result is a major work that explicitly questions the eurocentric dimensions of our conception of modernity.

Modern Japanese literature has long been judged by Western and Japanese critics alike according to its ability to measure up to Western realist standards—standards that assume the centrality of an essential self, or subject. Consequently, it has been made to appear deficient, derivative, or exotically different. Fujii challenges this prevailing characterization by reconsidering the very notion of the subject. He focuses on such disparate twentieth-century writers as Natsume Soseki, Tokuda Shusei, Shimazaki Toson, and Origuchi Shinobu, and particularly on their divergent strategies to affirm subjecthood in narrative form. The author probes what has been ignored or suppressed in earlier studies—the contestation that inevitably marks the creation of subjects in a modern nation-state. He demonstrates that as writers negotiate the social imperatives of national interests (which always attempt to dictate the limits of subjecthood) they are ultimately unable to avoid complicity with the aims of the state.

Fujii confronts several historical issues in ways that will enlighten historians as well as literary critics. He engages theory to highlight what prevailing criticism typically ignores: the effects of urbanization on Japanese family life; the relation of literature to an emerging empire and to popular culture; the representations of gender, family, and sexuality in Meiji society. Most important is his exposure of the relationship between state formation and cultural production. His skillful weaving of literary theory, textual interpretation, and cultural history makes this a book that students and scholars of modern Japanese culture will refer to for years to come.

James A. Fujii is Associate Professor of Japanese at the University of California, Irvine.

"James Fujii's Complicit Fictions is the first genuinely convincing study of the crucial relationship between the production of literature and the experience of history in the making of modern Japan. He has brilliantly, and with great intellectual originality, liberated the reading of modern Japanese prose narratives from an earlier, formalistic practice which had assimilated them to the requirements of the European realist novel, and thereby robbed them of their own particularity. As a replacement for the earlier critical program, he proposes a strategy that promises to restore the historical moment inscribed in the very act of narrative production. In making this move, he has, I believe, managed to bring these fictions back to Japan yet avoid reducing them to expressions of cultural exceptionalism. By showing us how the narratives of Shimazaki Toson, Natsume Soseki and Tokuda Shusei must be read for an enabling history which they invariably sought to repress, their historical unconscious, Fujii has given students of history and literature, in and out of Japan, a magisterial mix of critical sophistication and textual authority, rigorous thinking and stylistic elegance."—Harry Harootunian, University of Chicago

"Unlike many literary studies that seek to be theoretical but finally prove merely tautological, Complicit Fictions is both genuinely theoretical and passionately engaged. It explains all that needs explanation, leaving little to quotations or citations. James Fujii is stunningly lucid and persuasively precise. Together with Richard Okada's Figures of Resistance and Naoki Sakai's Voices of the Past, this work will open a new era in the studies of Japanese literature."—Masao Miyoshi, University of California, San Diego