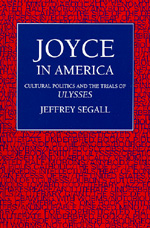 Joyce in America Cultural Politics and the Trials of Ulysses

When James Joyce's Ulysses was first published in America, it quickly became a dynamic symbol of both modern art and the modern age. Jeffrey Segall skillfully demonstrates how various political, ideological, and religious allegiances influenced the critical reception and eventual canonization of what is perhaps the twentieth century's greatest novel.

In re-creating the polemical debates that erupted, Segall provides a dramatic reminder of just how challenging and controversial Ulysses was—and is. Seventy years after Ulysses was first banned, the novel remains at the center of contemporary debates among feminist, neo-Marxist, and poststructuralist critics.

Segall allows us the opportunity to view Ulysses from the perspective of its early readers, and he also elucidates key moments in recent American cultural history.

"Segall provides a congenial survey of famous, polemical "American" responses to, occasionally, Joyce and Ulysses, from the 1920s into the 1950s."—American Studies International

"I hold [Ulysses] to be the most important expression which the modern age has found . . . to which we are all indebted, and from which none of us can escape."—T.S. Eliot

"A heap of dung, crawling with worms, photographed by a cinema apparatus through a microscope—such is Joyce's work."—Karl Radek