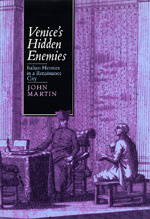 How could early modern Venice, a city renowned for its political freedom and social harmony, also have become a center of religious dissent and inquisitorial repression? To answer this question, John Martin develops an innovative approach that deftly connects social and cultural history. The result is a profoundly important contribution to Renaissance and Reformation studies.

Martin offers a vivid re-creation of the social and cultural worlds of the Venetian heretics—those men and women who articulated their hopes for religious and political reform and whose ideologies ranged from evangelical to anabaptist and even millenarian positions. In exploring the connections between religious beliefs and social experience, he weaves a rich tapestry of Renaissance urban life that is sure to intrigue all those involved in anthropological, religious, and historical studies—students and scholars alike.

John Martin is Associate Professor of History at Trinity University.

"At last the religious nonconformists of Reformation Italy have been resurrected by a master historian. Allowing them to speak in their own words, not just those of the theologians who inspired them or the inquisitors who interrogated them, Martin nimbly recreates the social world of the Italian evangelicals, anabaptists, and millenarians. . . . One of the most successful blendings of social and religious history yet achieved."—Edward Muir, Louisiana State University

"Martin skillfully navigates the intricate channels of shifting religious commitments and social interests, archival records and a rich historiography, large historical changes and individual experiences. A model of synthesis of social and cultural history, and the best case study we have so far on the challenge of the sixteenth-century religious crisis in Italy."—Randolph Starn, Univrsity of California, Berkeley