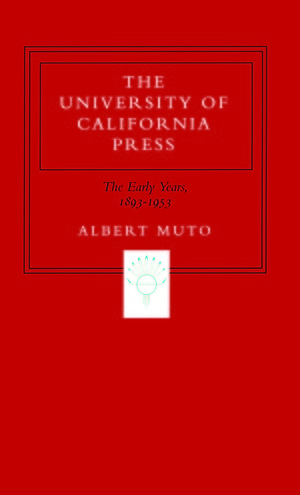 The University of California Press The Early Years, 1893-1953

In 1893, when the University of California was just twenty-five years old, its governing board took a bold step in voting the money to set up a publishing program for the works of its faculty. Like many of the American universities established in the late nineteenth century, California followed the German model of emphasizing original research among its faculty. But, then as now, commercial publishers were not prepared to publish the results, and so these early research universities began to publish for themselves. In the final quarter of the nineteenth century, Johns Hopkins, California, Chicago, and Columbia all began to publish. All four, in time, became scholarly publishers of consequence.

In this book, published to commemorate the centennial of the University of California Press, Albert Muto chronicles the early history of the Press, from its beginnings as a printer of monographs by the University's own faculty to its emergence in the early 1950s as a full-fledged university press in the Oxbridge tradition.

Profusely illustrated with archival photos and examples of early book design, this book gives us a new perspective on the history of publishing in the United States, and on the early years of the nation's largest public university.

Albert Muto has taught Library Studies at the University of California, Berkeley, where he specialized in the history of printing and publishing.