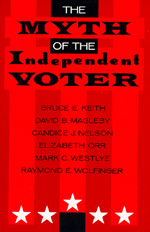 The Myth of the Independent Voter

Few events in American politics over the past two decades have generated more attention than the increasing number of voters calling themselves Independent. By the early 1970s Independents outnumbered Republicans, according to many eminent experts on voting behavior. Yet the authors of this incisive new commentary on American politics claim that most of this widespread speculation on declining party affiliation is simply wrong. They contend that most so-called Independents lean strongly toward one of the two parties and resemble—in all important respects—either Democrats or Republicans. Contrary to expert opinion, only a small segment of voters are truly "independent" of either major party.

Based on the most up-to-date 1990 data, The Myth of the Independent Voter provides a roadmap of the political arena for the general reader and scholar alike. Debunking conventional wisdom about voting patterns and allaying recent concerns about electoral stability and possible third party movements, the authors uncover faulty polling practices that have resulted in a skewed sense of the American voting population.

Demonstrating that most of what has been written about Independents for more than thirty years is myth, this challenging book offers a trenchant new understanding of the party system, voting behavior, and public opinion.

"Is U.S. party identification unraveling? No, these authors convincingly argue, using a wealth of evidence. So-called independent leaners, a growth stock among voters in recent times, think and act rather like straight partisans. Also, the "dealigning" thrust that we head so much about in the 1970s seems to have come and gone."—David Mayhew, Yale University

"Party politics is alive and well in America! A surprising conclusion given the Republican dominance of the presidency and the Democrats' lock on Congress."—Warren Mitofsky, Executive Director of Voter Research and Surveys

"Few pieces of conventional wisdom about politics have resonated as much among scholars, pundits, and politicians as the one that there is a large and growing army of independent voters threatening the stability of the two party system. The Myth of the Independent Voter systematically demolishes that c.w., in a lively but scholarly way. One can only hope that this book is express-mailed to every political commentator before they start the deluge of pontification about 1992."—Norman J. Ornstein, American Enterprise Institute

"Very few books absolutely require to be read. This is one of them. Every scholar studying American voting and elections from now on will have to come to terms with The Myth of the Independent Voter. If the authors are right (and they almost certainly are), an embarrassingly large proportion of the received wisdom of the 1970s and 1980s is going to have to be junked."—Anthony King, University of Essex


"Few developments in the politics of the last quarter century have been more remarked upon than the great increase in the numbers of voters who call themselves independents. For anyone seriously interested in assessing the meaning of that development, this is the book to read. Where others have jumped to conclusions, the authors ground theirs in an admirably clear and orderly marshalling of evidence. The result is a piece of research that clears the head of misconceptions about contemporary party politics and clears the way for realistic analyses of it."—Stanley Kelley, Jr., Princeton University

"A wonderfully provocative book. Its critical analyses scorch scores of generalizations about partisanship in the American electorate. Not everyone will be completely persuaded by the arguments made in this book, but no one will be able to ignore them."—Morris P. Fiorina, Harvard University
Read More >