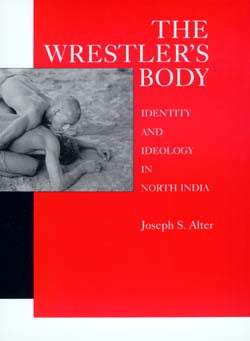 The Wrestler's Body Identity and Ideology in North India

The Wrestler's Body tells the story of a way of life organized in terms of physical self-development. While Indian wrestlers are competitive athletes, they are also moral reformers whose conception of self and society is fundamentally somatic. Using the insights of anthropology, Joseph Alter writes an ethnography of the wrestler's physique that elucidates the somatic structure of the wrestler's identity and ideology.

Young men in North India may choose to join an akhara, or gymnasium, where they subject themselves to a complex program of physical and moral fitness. Alter's first-hand description of each detail of the wrestler's regimen offers a unique perspective on South Asian culture and society. Wrestlers feel that moral reform of Indian national character is essential and advocate their way of life as an ideology of national health. Everyone is called on to become a wrestler and build collective strength through self-discipline.

Joseph S. Alter grew up in North India and was himself a youthful member of an akhara. He was educated at Woodstock School in India and at Wesleyan University and the University of California, Berkeley.