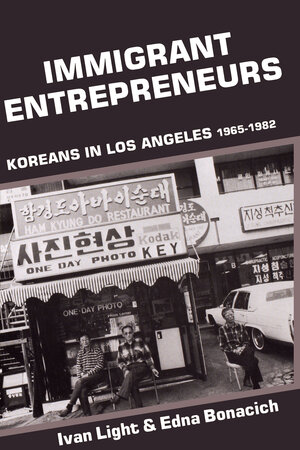 A decade in preparation, Immigrant Entrepreneurs offers the most comprehensive case study ever completed of the causes and consequences of immigrant business ownership. Koreans are the most entrepreneurial of America's new immigrants. By the mid-1970s Americans had already become aware that Korean immigrants were opening, buying, and operating numerous business enterprises in major cities. When Koreans flourished in small business, Americans wanted to know how immigrants could find lucrative business opportunities where native-born Americans could not. Somewhat later, when Korean-black conflicts surfaced in a number of cities, Americans also began to fear the implications for intergroup relations of immigrant entrepreneurs who start in the middle rather than at the bottom of the social and economic hierarchy.

Nowhere was immigrant enterprise more obvious or impressive than in Los Angeles, the world's largest Korean settlement outside of Korea and America's premier city of small business. Analyzing both the short-run and the long-run causes of Korean entrepreneurship, the authors explain why the Koreans could find, acquire, and operate small business firms more easily than could native-born residents. They also provide a context for distinguishing clashes of culture and clashes of interest which cause black-Korean tensions in cities, and for framing effective policies to minimize the tensions.

Preface to the Paperback Edition
Preface

PART ONE INTRODUCTION
I. Immigrant Entrepreneurs in America

PART TWO THE INTERNATIONAL CONTEXT AND THE ROOTS OF EMIGRATION
2. Cheap Labor in South Korea: The U.S. Role
3. The Role of the Korean Government
4. Emigration from South Korea