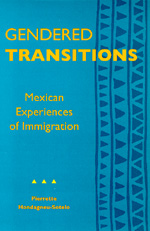 The momentous influx of Mexican undocumented workers into the United States over the last decades has spurred new ways of thinking about immigration. Pierrette Hondagneu-Sotelo's incisive book enlarges our understanding of these recently arrived Americans and uncovers the myriad ways that women and men recreate families and community institutions in a new land.

Hondagneu-Sotelo argues that people do not migrate as a result of concerted household strategies, but as a consequence of negotiations often fraught with conflict in families and social networks. Migration and settlement transform long-held ideals and lifestyles. Traditional patterns are reevaluated, and new relationships—often more egalitarian—emerge. Women gain greater personal autonomy and independence as they participate in public life and gain access to both social and economic influence previously beyond their reach.

Bringing to life the experiences of undocumented immigrants and delineating the key role of women in newly established communities, Gendered Transitions challenges conventional assumptions about gender and migration. It will be essential reading for demographers, historians, sociologists, and policymakers.

"I've opened my eyes. Back there, they say 'no.' You marry, and no, you must stay home. Here, it's different. You marry, and you continue working. Back in Mexico, it's very different. There is very much machismo in those men."—A Mexican woman living in the United States

Pierrette Hondagneu-Sotelo is Professor of Sociology at the University of Southern California.

"Edited by a leading pioneer of immigration studies, this volume offers some of the latest and most brilliant thinking about what migrant men and women bring to the United States, leave behind and create anew. This is a must read for those interested in immigration, gender, and the many meanings of life."—Arlie Russell Hochschild, co-editor with Barbara Ehrenreich of Global Woman: Nannies, Maids and Sex Workers in the New Economy

"Moving between individual decisions and broad political and economic forces, and focusing on family and community in Mexico and the U.S., Hondagneu-Sotelo's pathbreaking book casts new light on the centrality of gender for patterns of migration. A superb intersection of ethnography, history and theory."—Michael Burawoy, University of California, Berkeley

"A path-breaking book combining the study of gender with immigration to show how Mexican women and men continually reinvent themselves and their family lives in the U.S. Gendered Transitions offers rich insights into the complexities of women's settlement experiences and marks a new era in immigration studies."—Maxine Baca Zinn, Michigan State University 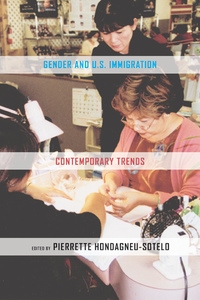