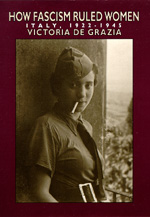 "Italy has been made; now we need to make the Italians," goes a familiar Italian saying. Mussolini was the first head of state to include women in this mandate. How the fascist dictatorship defined the place of women in modern Italy and how women experienced the Duce's rule are the subjects of Victoria de Grazia's new work. De Grazia draws on an array of sources—memoirs and novels, the images, songs, and events of mass culture, as well as government statistics and archival reports. She offers a broad yet detailed characterization of Italian women's ambiguous and ambivalent experience of a regime that promised modernity, yet denied women emancipation.

Always attentive to the great diversity among women and careful to distinguish fascist rhetoric from the practices that really shaped daily existence, the author moves with ease from the public discourse about femininity to the images of women in propaganda and commercial culture. She analyzes fascist attempts to organize women and the ways in which Mussolini's intentions were received by women as social actors. The first study of women's experience under Italian fascism, this is also a history of the making of contemporary Italian society.

Victoria de Grazia is Professor of History, Columbia University, and the author of The Culture of Consent: Mass Organization of Leisure in Fascist Italy (1981).

"This noteworthy study reveals how the regime of Il Duce, Benito Mussolini, systematically sought to prevent Italian women from experiencing emancipation even as he heralded the advent of the "new Italian woman." . . . Analyzing the deep conflict between modernity and traditional patriarchal authority, de Grazia defines the emerging ideals of Italian womanhood in the 1920s and '30s when Catholic, Fascist and commercial models of conduct competed to shape women's perceptions of themselves and of their society. . . . The product of meticulous research and deep contemplation, the book is an important contribution to women's studies."—Publishers Weekly

"Extremely well researched and drawing upon a vast array of sources, this is the first full-length study of the experiences of women under Italian fascism."—Library Journal

"For the common reader as well as the professional one, Victoria de Grazia opens doors and sheds new light on a fascinating subject."—Mary Gordon, author of The Other Side

1. THE NATIONALIZATION OF WOMEN
2. THE LEGACY OF LIBERALISM
3· MOTHERHOOD
4· THE FAMILY VERSUS THE STATE
5· GROWING UP
6. WORKING
7· GOING OUT
8. WOMEN'S POLITICS IN A NEW KEY
9· THERE WILL COME A DAY 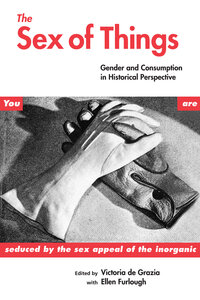 The Sex of Things