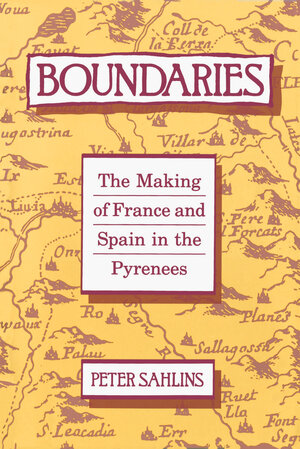 Boundaries The Making of France and Spain in the Pyrenees

This book is an account of two dimension of state and nation building in France and Spain since the seventeenth century--the invention of a national boundary line and the making of Frenchmen and Spaniards. It is also a history of Catalan rural society in the Cerdanya, a valley in the eastern Pyrenees divided between Spain and France in 1659. This study shuttles between two levels, between the center and the periphery. It connects the "macroscopic" political and diplomatic history of France and Spain, from the Old Regime monarchies to the national territorial states of the later nineteenth century; and the "molecular" history--the historical ethnography--of Catalan village communities, rural nobles, and peasants in the borderland. On the frontier, these two histories come together, and they can be told as one.

Peter Sahlins is Assistant Professor of History at the University of California, Berkeley.

"A brilliant, long-range sociological study . . . This fascinating exploration through three centuries of the frontier is rounded off with a perceptive and balanced appraisal of the nature of national identity within the context of the Pyrenees . . . . This is a study which is exciting, learned and thought-provoking, a splendid example of interdisciplinary history at its best." --Henry Kamen, Times Literary Supplement "Peter Sahlins gives us a magnificent lesson in interdisciplinary scholarship on a very basic theme: how the identity of individuals, their families, and their villages on both sides of the boundary has been shaped by their belonging to two different states--states whose development, moreover, has proceeded very differently. I had always hoped for a study of the 'boundary phenomenon,' and Peter Sahlins' work has answered my wish." --Pierre Vilar, Ecole des Hautes Etudes en Sciences Sociales "I can see this book finding a privileged place on the shelves of European historians. Beyond this it will certainly be of interest to anthropologists, sociologists, and other concerned with the problems of ethnicity; and it should excite the interest of political scientists as well." --Eric R. Wolf, City University of New York

Figures, Tables, Maps, and Illustrations
Abbreviations
Note
Preface
Acknowledgment
Introduction
1. The Treaty of the Pyrenees and the Division of
the Cerdanya
2. The Frontiers of the Old Regime State
3. Resistance and Identity under the Old Regime
4. Community, Class, and Nation in the Eighteenth-
Century Borderland
5. The French Revolution
6. Territory and Identity during the Spanish Crises
(1808-1840)
7. The Treaties of Bayonne and the Delimitation
of the Boundary
8. Conclusion: Identity and Counter-Identity
Epilogue: States and Nations since 1868

Appendixes:
A. Texts of the Division of the Cerdanya,
1659-1660 and 1868
B. Population, Marriage, and Property
between the Seventeenth and Nineteenth
Centuries
Bibliography
List of Abbreviations and
Archival Sources Consulted
Other Sources Cited
Index