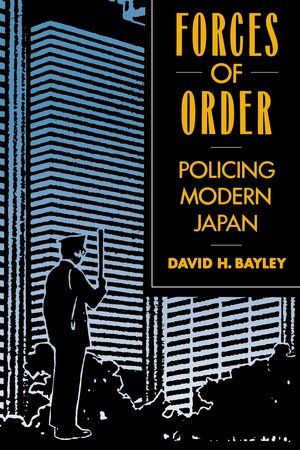 In sharp contrast to the United States, Japan has one of the lowest crime rates in the world and practically no police brutality or corruption. Urban congestion is often blamed for the soaring crime rate in the United States and the waning public confidence in the American police force, yet Japan's population per square mile is almost thirty times that of ours. In Forces of Order, originally published in 1976 and now thoroughly revised and expanded, David Bayley examines the reasons behind Japan's phenomenal success when it comes to public order.

The Japanese police force is the world's most developed model of "community policing." To study it, Bayley conducted hundreds of interviews with police officers in Japan and spent many hours observing them on patrol, mostly at night. Making explicit comparisons between Japan and the United States, he analyzes Japan's record in policing and crime, the life of patrol officers, police relations with the community, police discipline and responsibility, the police as an institution, victimless crime, and deviance and authority in Japanese culture.

The essential lesson of the book is that the incidence of crime as well as the nature of police practices is rooted in long-standing traditions that are profoundly related to fundamental matters of morality, culture, and historical experience. Bayley shows that the key differences between Japan and the United States do not stem from the economic or political structures of the two countries, but from the characteristic way in which people are expected to relate to one another and the sorts of social institutions that shape and reinforce those expectations.

"An important contribution to our understanding of the socio-cultural foundations of police behavior. . . . No one with a serious interest in the police and their problems can afford to ignore this excellent comparative analysis of police behavior in Japan."—Sociology

"Pluralist, individualist America, attempting to cure its urban malaise with large doses of private weaponry and security hardware, would probably reject a straight transplant of Japanese police methods, but Bayley's fascinating insights should contribute to a better diagnosis."—Journal of American Studies

"A superb, eminently readable book that speaks directly to law enforcement issues in the U.S. On the basis of interviews with hundreds of Japanese police officials, Bayley provides a clear picture of the police and the public in that country. The contrast with the U.S. is astounding: police corruption and brutality are so rare as to be virtual non-issues, and the crime rate is one of the lowest in the world. The comparison is even more startling when it is shown that many of the 'explanations' given for the high incidence of crime in the U.S.—urban congestion, a preoccupation with violence in the media, etc.—are a phenomena that are equally common in Japan. Bayley's work offers a fresh perspective on crime and police protection in the U.S., while providing a fascinating look at the same problems in another modern industrial society."—Library Journal

"An outstanding contribution to the police literature and to the growing number of studies in comparative criminal policy."—American Political Science Review