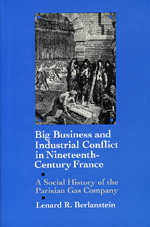 Founded in 1855, the Parisian Gas Company (PGC) quickly developed into one of France's greatest industrial enterprises, an exemplar of the new industrial capitalism that was beginning to transform the French economy. The PGC supplied at least half the coal gas consumed in France through the 1870s and became the city's single largest employer of clerical and factory labor. Representing a new form and scale of capitalistic endeavor, the firm's history illuminates the social tensions that accompanied the nation's industrialization and democratization.

To study the company over its fifty-year life is to see industrializing France writ small. Using previously untapped company archives, Lenard R. Berlanstein has written a rich and detailed study that skillfully bridges the divide between business, social, and labor history.

Lenard R. Berlanstein is Professor of History at the University of Virginia, and the author of The Barristers of Toulouse in the Eighteenth Century (1975) and The Working People of Paris, 1871-1914 (1984), both from Johns Hopkins.

"An original and splendidly researched work. We have nothing of equal depth on a single company, and such a study enhances our understanding of complex issues in the economic, social, and political, and even cultural history of modern France."—John Merriman, Yale University