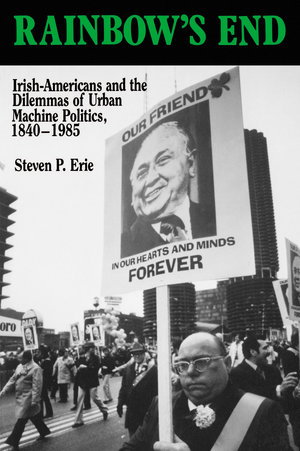 Rainbow's End Irish-Americans and the Dilemmas of Urban Machine Politics, 1840-1985

Unprecedented in its scope, Rainbow's End provides a bold new analysis of the emergence, growth, and decline of six classic Irish-American political machines in New York, Jersey City, Chicago, San Francisco, Pittsburgh and Albany. Combining the approaches of political economy and historical sociology, Erie examines a wide range of issues, including the relationship between city and state politics, the manner in which machines shaped ethnic and working-class politics, and the reasons why centralized party organizations failed to emerge in Boston and Philadelphia despite their large Irish populations. The book ends with a thorough discussion of the significance of machine politics for today's urban minorities.

Steven P. Erie is Professor Emeritus of Political Science at the University of California, San Diego.

"...a provocative reinterpretation of the rise and fall of the Irish bosses. . . there is [a] great deal to chew on in Mr. Erie's iconoclastic book. One after the other, he challenges views of the old machines that sentimentality has erected into verities."—New York Times

"Theoretically, historically and comparatively Rainbow's End is a significant and provocative contribution to this double process. Future books will surely depend on it as they draw on political economy and urban sociology to explain the machine and its opponents."—American Journal of Sociology

"This book should be read and used by those who teach courses with sections on machine politics in the United States. . . . Erie draws on a broad literature and effectively challenges some going interpretations of machines."—American Political Science Review

"...Rainbow's End provides a handy and comprehensible review of the literature on the life cycle of urban machines. By exploring the varying historical contexts of machine activity, Erie's study also modifies the conventional wisdom which suggests that the machine experience offers a feasible option for minorities interested in transforming the nature of political representation in many American cities."—Pennsylvania History