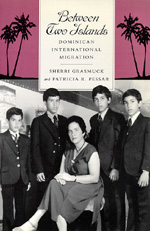 Popular notions about migration to the United States from Latin America and the Caribbean are too often distorted by memories of earlier European migrations and by a tendency to generalize from the more familiar cases of Mexico and Puerto Rico. Between Two Islands is an interdisciplinary study of Dominican migration, challenging many widespread, yet erroneous, views concerning the socio-economic background of new immigrants and the causes and consequences of their move to the United States.

Eschewing monocausal treatments of migration, the authors insist that migration is a multifaceted process involving economic, political, and socio-cultural factors. To this end, they introduce an innovative analytical framework which includes such determinants as the international division of labor; state policy in the sending and receiving societies; class relations; transnational migrant households; social networks; and gender and generational hierarchies.

By adopting this multidimensional approach, Grasmuck and Pessar are able to account for many intriguing paradoxes of Dominican migration and development of the Dominican population in the U.S. For example, why is it that the peak in migration coincided with a boom in Dominican economic growth? Why did most of the immigrants settle in New York City at the precise moment the metropolitan economy was experiencing stagnation and severe unemployment? And why do most immigrants claim to have achieved social mobility and middle-class standing despite employment in menial blue-collar jobs?

Until quite recently, studies of international migration have emphasized the male migrant, while neglecting the role of women and their experiences. Grasmuck and Pessar's attempt to remedy this uneven perspective results in a better overall understanding of Dominican migration. For instance, they find that with regard to wages and working conditions, it is a greater liability to be female than to be without legal status. They also show that gender influences attitudes toward settlement, return, and workplace struggle.

Finally, the authors explore some of the paradoxes created by Dominican migration. The material success achieved by individual migrant households contrasts starkly with increased socio-economic inequality in the Dominican Republic and polarized class relations in the United States.

This is an exciting and important work that will appeal to scholars and policymakers interested in immigration, ethnic studies, and the continual reshaping of urban America.

Sherri Grasmuck is Director of Women's Studies and Associate Professor of Sociology at Temple University. Patricia R. Pessar is Research Director of the Center for Immigration Policy and Refugee Assistance at Georgetown University.