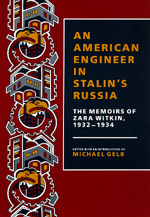 An American Engineer in Stalin's Russia The Memoirs of Zara Witkin, 1932-1934

In 1932 Zara Witkin, a prominent American engineer, set off for the Soviet Union with two goals: to help build a society more just and rational than the bankrupt capitalist system at home, and to seek out the beautiful film star Emma Tsesarskaia.

His memoirs offer a detailed view of Stalin's bureaucracy—entrenched planners who snubbed new methods; construction bosses whose cover-ups led to terrible disasters; engineers who plagiarized Witkin's work; workers whose pride was defeated. Punctuating this document is the tale of Witkin's passion for Tsesarskaia and the record of his friendships with journalist Eugene Lyons, planner Ernst May, and others.

Witkin felt beaten in the end by the lethargy and corruption choking the greatest social experiment in history, and by a pervasive evil—the suppression of human rights and dignity by a relentless dictatorship. Finally breaking his spirit was the dissolution of his romance with Emma, his "Dark Goddess."

In his lively introduction, Michael Gelb provides the historical context of Witkin's experience, details of his personal life, and insights offered by Emma Tsesarskaia in an interview in 1989.

Zara Witkin (1900-1940) was born in California to a family of Russian Jewish emigrants. On his return from the USSR in 1934 he founded a firm to manufacture prefabricated housing. After a long illness, he died in Los Angeles. Michael Gelb is Assistant Professor of History at Franklin and Marshall College.