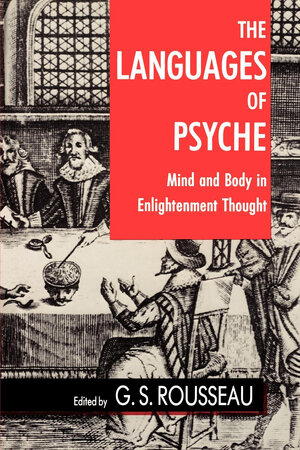 The Languages of Psyche Mind and Body in Enlightenment Thought

The Languages of Psyche traces the dualism of mind and body during the "long eighteenth century," from the Restoration in England to the aftermath of the French Revolution. Ten outstanding scholars investigate the complex mind-body relationship in a variety of Enlightenment contexts—science, medicine, philosophy, literature, and everyday society. No other recent book provides such an in-depth, suggestive resource for philosophers, literary critics, intellectual and social historians, and all who are interested in Enlightenment studies.

G. S. Rousseau is Professor of English and Eighteenth Century Studies at the University of California, Los Angeles, and the author of books and articles dealing with the culture of the eighteenth century, including (with Marjorie Hope Nicolson) This Long Disease, My Life: Alexander Pope and the Sciences, and a trilogy of books about sex in the Enlightenment, co-edited with Roy Porter.

"The Languages of Psyche illuminates principal aspects of eighteenth-century medicine and literature and shows how evolving patterns of thought established continuities that helped shape nineteenth- and twentieth-century conceptions of the mental anatomy. Specialists in the history of ideas, including the history of medical psychology, philosophy, political science, and literature and the arts, should welcome its publication."—Gloria Sybil Gross, California State University, Northridge

"This is a splendid anthology, which I read with unflagging interest. . . . The editor has managed an eclecticism that works. It produces rich and fascinating variety rather than chaos."—Henry Abelove, Wesleyan University

"A very impressive set of essays dealing with an important topic in eighteenth-century thought . . . written by some of the leading scholars in social history, history of science and medicine, and literary studies."—John Yolton, Rutgers University