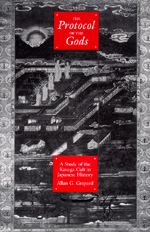 The Protocol of the Gods is a pioneering study of the history of relations between Japanese native institutions (Shinto shrines) and imported Buddhist institutions (Buddhist temples). Using the Kasuga Shinto shrine and the Kofukuji Buddhist temple, one of the oldest and largest of the shrine-temple complexes, Allan Grapard characterizes what he calls the combinatory character of pre-modern Japanese religiosity. He argues that Shintoism and Buddhism should not be studied in isolation, as hitherto supposed. Rather, a study of the individual and shared characteristics of their respective origins, evolutions, structures, and practices can serve as a model for understanding the pre-modern Japanese religious experience.

Spanning the years from a period before historical records to the forcible separation of the Kasuga-Kofukuji complex by the Meiji government in 1868, Grapard presents a wealth of little-known material. He includes translations of rare texts and provides new, accessible translations of familiar documents.

Allan G. Grapard is Associate Professor of Religion at the University of California, Santa Barbara.