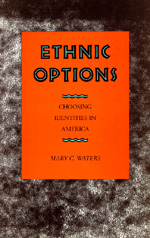 In this perceptive and revealing study, Mary Waters explores the "reinvention" of ethnicity in the lives of the grandchildren and great grandchildren of European immigrants, asking how their ethnic heritage is lived, maintained, and celebrated. Through in-depth interviews with sixty third and fourth generation white ethnics in suburban California and Pennsylvania, the author discovers a surprisingly resilient sense of ethnicity among people who could reasonably label themselves simply "American."

Mary Waters' research brings to light a fascinating history of American immigration, revealing aspects of a shared culture and ideology and the unique ways in which ethnic identities fulfill very American needs. Describing the "symbolic ethnicity" of later generation white ethnics as a quintessential American phenomenon, she argues that ethnicity has retained its importance in our lives precisely because it allows people to reconcile the contradictory American values of choice, individuality, and community.

In addition to her exploration of the symbolic ethnicity of later generation middle-class whites, Mary Waters addresses its cost to society, contrasting it with the optionless ethnicity of non-white Americans. Her conclusions in Ethnic Options constitute an invaluable contribution to our understanding of contemporary American life.

"Mary Waters' admirable study of Americans' ethnic choices produces a rich social-scientific yield. Its theoretical interest derives from the American irony that while ethnicity is 'supposed to be' ascribed, many Americans are active in choosing and making their ethnic memberships and identities. The monograph is simultaneously objective and attentive to subjective meaning, simultaneously quantitative and qualitative, and simultaneously sociological and psychological. Her research problems are well-conceived, and her findings important and well-documented. As ethnicity and race continue in their high salience in American society and politics, sound social-scientific studies like this one are all the more valuable."—Neil Smelser, co-editor of The Social Importance of Self-Esteem

"One of the most sensible and elegant books about ethnicity in the United States that has ever been my great pleasure to read."—Andrew M. Greeley, University of Chicago

"Skilled in both demographic and interviewing methods, Mary Waters makes ethnicity in contemporary America come alive. We learn how people construct their identities, and why. This is sociological research at its very best, and will be of interest to policy makers and educated Americans as well as to students and scholars in several disciplines."—Theda Skocpol, Harvard University

"Perhaps the most intriguing question in the study of the 'old (European) immigration" is how the 4th, 5th and later generations who are the offspring of several intermarriages are choosing their ethnic identities from the several available to them. Professor Waters' clever mix of quantitative and qualitative research has produced some thoughtful and eminently sensible answers to that question, making her book required reading for students of ethnicity. Her work should also interest general readers concerned with their or their children's ethnic identity—or just curious about this yet little known variety of American pluralism."—Herbert J. Gans, Columbia University


"Waters has produced a work with broad theoretical implications. The title . . . may be regarded as one of the first serious attempts to understand the dynamics of postmodern societies. Waters shows that ethnicity becomes transformed from as ascriptive into an achieved status, a voluntary construction of individual identity and group solidarity. Waters also shows that, in America at least, this increased flexibility is unavailable to racial minorities."—Jeffrey C. Alexander, University of California, Los Angeles

"A theoretically informed and theoretically driven fine-grained analysis pooling ideas and issues in both ethnography and demography."—Stanley Lieberson, Harvard University

"Thanks to Ethnic Options we have a much better understanding of the social and cultural significance of responses to the ancestry question on the 1980 census. By combining in-depth interviews with analysis of census data, Mary Waters puts flesh on the demographic bare bones. Her findings suggest that ethnicity is becoming less an ascribed trait, fixed at birth, than an 'option' that depends on circumstance, whim, and increasingly, the ethnicity of one's spouse."—Stephen Steinberg, author of The Ethnic Myth
Read More >