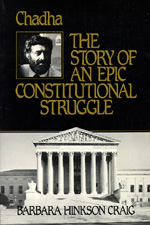 Chadha The Story of an Epic Constitutional Struggle

In 1973 Jagdish Chadha found himself a man without a country, the victim of the decolonization of Kenya where, as a Kenyan of Indian descent, he was not allowed to return after having spent six years in the U.S. as a student. Barbara Hinkson Craig describes Chadha's effort to achieve legal residency in the U.S. and shows how it led to the Supreme Court decision to overrule the legislative veto, adjusting the balance of powers in the United States government.

Barbara Hinkson Craig is Professor of Governement, Wesleyan University and the author of The Legislative Veto: Congressional Control of Legislation.