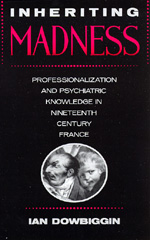 Historically, one of the recurring arguments in psychiatry has been that heredity is the root cause of mental illness. In Inheriting Madness, Ian Dowbiggin traces the rise in popularity of hereditarianism in France during the second half of the nineteenth century to illuminate the nature and evolution of psychiatry during this period.

In Dowbiggin's mind, this fondness for hereditarianism stemmed from the need to reconcile two counteracting factors. On the one hand, psychiatrists were attempting to expand their power and privileges by excluding other groups from the treatment of the mentally ill. On the other hand, medicine's failure to effectively diagnose, cure, and understand the causes of madness made it extremely difficult for psychiatrists to justify such an expansion. These two factors, Dowbiggin argues, shaped the way psychiatrists thought about insanity, encouraging them to adopt hereditarian ideas, such as the degeneracy theory, to explain why psychiatry had failed to meet expectations. Hereditarian theories, in turn, provided evidence of the need for psychiatrists to assume more authority, resources, and cultural influence.

Inheriting Madness is a forceful reminder that psychiatric notions are deeply rooted in the social, political, and cultural history of the profession itself. At a time when genetic interpretations of mental disease are again in vogue, Dowbiggin demonstrates that these views are far from unprecedented, and that in fact they share remarkable similarities with earlier theories. A familiarity with the history of the psychiatric profession compels the author to ask whether or not public faith in it is warranted.

Ian Dowbiggin is a Professor of HIstory at the University of Prince Edward Island.