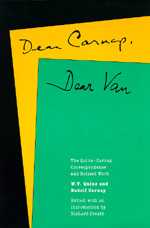 Dear Carnap, Dear Van The Quine-Carnap Correspondence and Related Work: Edited and with an introduction by Richard Creath

Rudolf Carnap and W. V. Quine, two of the twentieth century's most important philosophers, corresponded at length—and over a long period of time—on matters personal, professional, and philosophical. Their friendship encompassed issues and disagreements that go to the heart of contemporary philosophic discussions. Carnap (1891-1970) was a founder and leader of the logical positivist school. The younger Quine (1908-) began as his staunch admirer but diverged from him increasingly over questions in the analysis of meaning and the justification of belief. That they remained close, relishing their differences through years of correspondence, shows their stature both as thinkers and as friends. The letters are presented here, in full, for the first time.

The substantial introduction by Richard Creath offers a lively overview of Carnap's and Quine's careers and backgrounds, allowing the nonspecialist to see their writings in historical and intellectual perspective. Creath also provides a judicious analysis of the philosophical divide between them, showing how deep the issues cut into the discipline, and how to a large extent they remain unresolved.