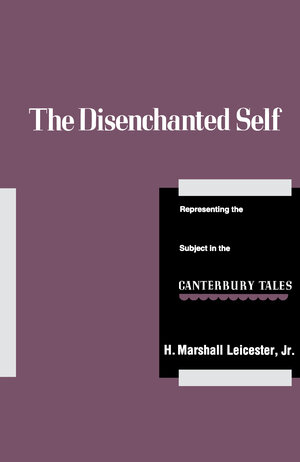 The Disenchanted Self Representing the Subject in the Canterbury Tales

The question of the "dramatic principle" in the Canterbury Tales, of whether and how the individual tales relate to the pilgrims who are supposed to tell them, has long been a central issue in the interpretation of Chaucer's work. Drawing on ideas from deconstruction, psychoanalysis, and social theory, Leicester proposes that Chaucer can lead us beyond the impasses of contemporary literary theory and suggests new approaches to questions of agency, representation, and the gendered imagination.

Leicester reads the Canterbury Tales as radically voiced and redefines concepts like "self" and "character" in the light of current discussions of language and subjectivity. He argues for Chaucer's disenchanted practical understanding of the constructed character of the self, gender, and society, building his case through close readings of the Pardoner's, Wife of Bath's, and Knight's tales. His study is among the first major treatments of Chaucer's poetry utilizing the techniques of contemporary literary theory and provides new models for reading the poems while revising many older views of them and of Chaucer's relation to his age.

H. Marshall Leicester, Jr. is Professor of English Literature at the University of California, Santa Cruz. He is the author of several articles on Chaucer and medieval literature.

"Leicester performs a full-scale revision of the 'dramatic way of reading Chaucer,' the 'character-oriented, dramatic approaches' that continue to underlie many (perhaps most) current readings of Chaucer. His well-articulated approach to the Tales is informed by immersion in and understanding of current literary-critical theory. In fact, he makes an important intervention in critical theory (certainly in medieval literary criticism) in his project of 'recovering the subject' and theorizing its agency after the evacuation of individual subjectivity by structuralism. He operates in the knowledge that the human subject is a construct, however, a knowledge that structuralism provided; Leiscester's is thus best understood as a 'post-structuralist acitivity.' Along the way, he does brilliant close readings of thee major Tales—the Wife of Bath's, Pardoner's, and Knight's--and the General Prologue. Very few writers have asked of and gotten so much from Chaucer's texts."—Carolyn Dinshaw, author of Chaucer's Sexual Politics

"A brilliant study of the nature of human subjectivity in Chaucer's Canterbury Tales. It responds to some controversial issues in Chaucer criticism and to relevant questions in modern psychoanalytic, post-structuralist, and sociological theories of the self. It contributes to both Chaucer studies and modern theory by giving rich, nuanced, and fruitful readings of three tales. . . . Leicester's interpretations of the poems are original and compelling. Having read them, I find them indispensable."—Judith Ferster, author of Chaucer on Interpretation