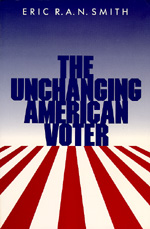 Have the American people grown more politically sophisticated in the past three decades, or do they remain relatively ignorant of the political world? Did a "great leap forward" take place during the 1960s in which our citizenry became involved and adept voters? In this important book, Eric Smith addresses these and other provocative questions that have long befuddled political scientists and policymakers.

Much of the current wisdom about American voters derives from an argument advanced in a volume entitled The Changing American Voter, written by Nie, Verba, and Petrocik. In this work, the authors contend that the electorate made a "great leap forward" in political sophistication and ideological thinking between the 1960 and 1964 elections. They argue that people changed in response to a shifting environment, and that, in particular, the surge of protest and ideological rhetoric between 1960 and 1964 engendered a new political savvy and sophistication. In their view, people learned to understand politics better, to relate the issues to the candidates more accurately, and to cast more informed, intelligent votes.

In The Unchanging American Voter, Smith takes issue with this portrait of an engaged American citizenry and replaces it with a quite different picture of the voters of this nation. He posits a more bleak political landscape in which the typical voter knows little about politics, is not interested in the political arena and consequently does not participate in it, and is even unable to organize his or her attitudes in a coherent manner. To support this view, Smith demonstrates how the indices by which Nie, Verba, and Petrocik measured levels of sophistication during the 1960s were methodologically flawed and how a closer examination of supposed changes reveals only superficial and unimportant shifts in the ways voters have approached the ballot box since the 1950s.

The Unchanging American Voter is an intelligent and original work that provides a new perspective of the American citizenry. It is sure to engender discussion and debate about the dynamics of voting in postwar America.

"One of the most elegant pieces of political analysis I have seen in years. It challenges a generation of research on 'levels of conceptualization' and supposed change in the nature of the electorate, and it does so clearly, thoroughly, and convincingly. . . .A truly superior work."—Gary Jacobson, University of California, San Diego

"This book is technically sophisticated, clearly written, and it makes an important point. It will have a significant impact on students of public opinion and voting."—Henry Brady, University of Chicago