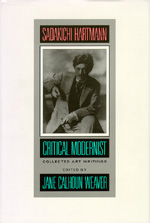 Brilliant and controversial, art critic Sadakichi Hartmann wrote copiously about American and European art and the shaping of American culture during the decades from 1890 to 1910. Jane Weaver has recovered and assembled over fifty of Hartmann's critical writings from influential, though often obscure, turn-of-the-century journals. These reviews and theoretical essays not only provide some of the earliest known criticism of important artists and photographers of the period, but also make Hartmann's fundamental—and uniquely American—definition of modernism available to students of art and cultural history. A most useful adjunct to the text is a complete bibliography of Hartmann's writings on art, as well as an annotated checklist of all the artists treated by Hartmann in this book.

Sadakichi Hartmann (1867-1944), half German, half Japanese, learned the American cast of mind and heart as a beloved young disciple of the aged Walt Whitman. Reflecting the poet's zealous vision, Hartmann's piercing commentaries on the art centers of Boston and New York offer unparalleled documentation of the years before and after 1900.

Jane Weaver is the Americanist on the research staff of the Frick Art Reference Library photo archive in New York. She received her doctoral degree from the University of North Carolina at Chapel Hill.

"So much critical writing on the visual arts in this country today is what I call criticism without memory. This book does much to restore an important chapter in the cultural memory all of our critics should have."—Hilton Kramer, Editor, The New Criterion