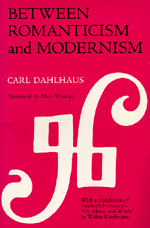 Carl Dahlhaus here treats Nietzsche's youthful analysis of the contradictions in Wagner's doctrine (and, more generally, in romantic musical aesthetics); the question of periodicization in romantic and neo-romantic music; the underlying kinship between Brahms's and Wagner's responses to the central musical problems of their time; and the true significance of musical nationalism. Included in this volume is Walter Kauffman's translation of the previously unpublished fragment, "On Music and Words," by the young Nietzsche.

Until his death in March, 1989, Carl Dahlhaus was Professor of Music at the Technische Universität in Berlin and general editor of the complete edition of Wagner's works. He is the author of Nineteenth-Century Music (California, 1989).

"Neo-romanticism"
The Twofold Truth in Wagner's Aesthetics:Nietzsche's Fragment "On Music and Words"
Issues in Composition
(translated in collaboration with Arnold Whittall)
1. The musical idea
2. Real sequence and developing variation
3. "Musical prose" and "endless melody"
4. "Expanded" and "wandering" tonality
5. The "individualization" of harmony
6. Conclusion
Nationalism and Music
1. The "Volksgeist" hypothesis
2. Nationalism and folk music
3. On the aesthetics of national expression in music
Appendix
Friedrich Nietzsche, "On Music and Words"
translated by Walter Kaufmann 103
Index