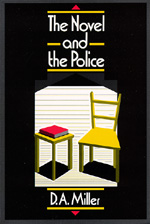 The Novel and The Police

Through a series of readings in the work of the decisive triumvirate of Victorian fiction, Dickens, Trollope and Wilkie Collins, Miller investigates the novel as an oblique form of social control.

D.A. Miller is Professor of English at the University of California, Berkeley.

"With the appearance of D.A. Miller's remarkable book, the Victorian novel has its most dazzling critic in years. . . . Miller's subject is not so much the police in fiction as fiction and policing, narrative as a conservative function of the polis. Tracking diverse strategies of surveillance and incarceration into the confines of the fictional institution itself, Miller investigates Victorian novels as the often unconscious agent of a disciplinary culture. He thus reads fiction reading us, keeping a public in its private place. His mastery of an intricate, layered, and sinuous argument is stunning, the writing no less than superb. For all the book's overarching debt to Foucault, D.A. Miller 'do the police' in a voice all his own."—Garrett Stewart, author of Death Sentences: Styles of Dying in British Fiction

ONE
The Novel and the Police

TWO
From roman policier to roman-police:
Wilkie Collins's The Moonstone