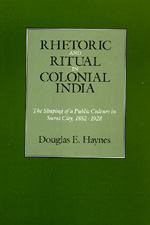 Rhetoric and Ritual in Colonial India The Shaping of a Public Culture in Surat City, 1852-1928

This book explores the rhetoric and ritual of Indian elites undercolonialism, focusing on the city of Surat in the Bombay Presidency. It particularly examines how local elites appropriated and modified the liberal representative discourse of Britain and thus fashioned a "public' culture that excluded the city's underclasses. Departing from traditional explanations that have seen this process as resulting from English education or radical transformations in society, Haynes emphasizes the importance of the unequal power relationship between the British and those Indians who struggled for political influence and justice within the colonial framework. A major contribution of the book is Haynes' analysis of the emergence and ultimate failure of Ghandian cultural meanings in Indian politics after 1923.

The book addresses issues of importance to historians and anthropologists of India, to political scientists seeking to understand the origins of democracy in the "Third World," and general readers interested in comprehending processes of cultural change in colonial contexts.

Douglas Haynes is Associate Professor of History at Dartmouth College. 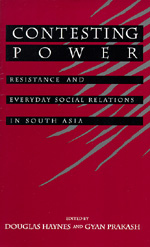