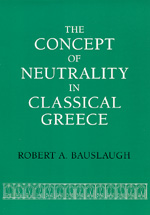 The Concept of Neutrality in Classical Greece

Looking at Classical warfare from the perspective of the non-belligerents, Robert A. Bauslaugh brings together the scattered evidence testifying to neutral behavior among the Greek city-states and their non-Greek neighbors. Were the Argives of 480/479 B.C. really "Medizers," as many have accused, or were they pursuing a justifiable policy of neutrality as they claimed? On what basis in international law or custom did the Corcyraeans claim non-alignment? Why were the leading belligerent states willing to accept the inclusion of a "neutrality clause" in the Common Peace of 371? These questions have not been asked by historians of international law, and the answers provide a far more complex and sophisticated picture of interstate relations than has so far been available.

Despite the absence of exclusively diplomatic language, the concept of respect for neutrals appears early in Greek history and remains a nearly constant feature of Classical wars. The problems confronting uncommitted states, which have clear parallels in modern history, were balanced by widespread acceptance of the need for limitations on the chaos of warfare.

Robert A. Bauslaugh is Associate Professor of Classics at Emory University.

"A definitive contribution to the history of Western diplomacy. Thanks to Bauslaugh, the concept of neutrality must play a part in all future discussions of classical Aegean interstate politics."—Nicholas F. Jones, author of Public Organization in Ancient Greece