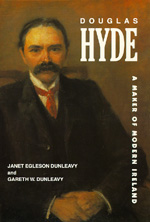 In 1938, at an age when most men are long retired, Douglas Hyde (1860-1949) was elected first president of modern Ireland. The unanimous choice of delegates from all political factions, he was no stranger to public life or to fame. Until now, however, there has been no full-scale biography of this important historical and literary figure.

Known as a tireless nationalist, Hyde attracted attention on both sides of the Atlantic from a very early age. He was hailed by Yeats as a source of the Irish Literary Renaissance; earned international recognition for his contributions to the theory and methodology of folklore; joined Lady Gregory, W. B. Yeats, George Moore, and Edward Martyn in shaping an Irish theater; and as president of the Gaelic League worked for twenty-two years on behalf of Irish Ireland.

Yet in spite of these and other accomplishments Hyde remained an enigmatic figure throughout his life. Why did he become an Irish nationalist? Why were his two terms as Irish Free State senator so curiously passive? Why, when he had threatened it earlier, did he oppose the use of physical force in 1916? How did he nevertheless retain the support of his countrymen and the trust and friendship of such a man as Eamon de Valera? Douglas Hyde: A Maker of Modern Ireland dispels for the first time the myths and misinformation that have obscured the private life of this extraordinary scholar and statesman.

Janet Egleson Dunleavy and Gareth W. Dunleavy are both Professors of English and Comparative Literature at the University of Wisconsin-Milwaukee.

"This biography of a man who was not only a political leader but an influential figure in literary history . . . should become the standard work."—James F. Kilroy, Tulane University

"Apart from the book's interest to students of modern Irish literature and history, this biography describes a process of linguistic and literary nationalism destined to be repeated all over the world later in the 20th century. . . . The first real description of Hyde's personality, life, and achievements."—Robert Tracy, University of California, Berkeley