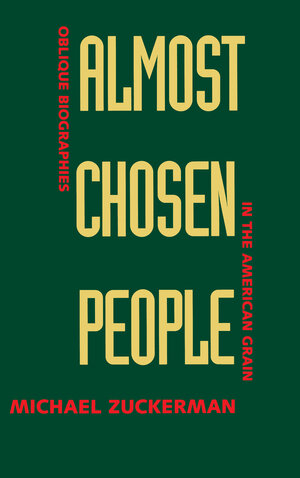 Few historians are bold enough to go after America's sacred cows in their very own pastures. But Michael Zuckerman is no ordinary historian, and this collection of his essays is no ordinary book.

In his effort to remake the meaning of the American tradition, Zuckerman takes the entire sweep of American history for his province. The essays in this collection, including two never before published and a new autobiographical introduction, range from early New England settlements to the hallowed corridors of modern Washington. Among his subjects are Puritans and Southern gentry, Benjamin Franklin and Benjamin Spock, P. T. Barnum and Ronald Reagan. Collecting scammers and scoundrels, racists and rebels, as well as the purest genius, he writes to capture the unadorned American character.

Recognized for his energy, eloquence, and iconoclasm, Zuckerman is known for provoking—and sometimes almost seducing—historians into rethinking their most cherished assumptions about the American past. Now his many fans, and readers of every persuasion, can newly appreciate the distinctive talents of one of America's most powerful social critics.

Michael Zuckerman is Professor of History at the University of Pennsylvania. His articles have appeared in numerous journals, and he is the author of Peaceable Kingdoms: New England Towns in the Eighteenth Century (1970) and the editor of Friends and Neighbors: Group Life in America's First Plural Society (1982).