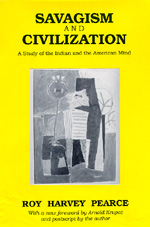 First published in 1953, revised in 1964, and presented here with a new foreword by Arnold Krupat and new postscript by the author, Roy Harvey Pearce's Savagism and Civilization is a classic in the genre of history of ideas. Examining the political pamphlets, missionaries' reports, anthropologists' accounts, and the drama, poetry, and novels of the 18th and early 19th centuries, Professor Pearce traces the conflict between the idea of the noble savage and the will to Christianize the heathen and appropriate their land, which ended with the near extermination of Native American culure.

PART 1: Antecedents and Origins, 1609-1777
I Spirituals and Temporals: The Indian in Colonial Civilization

PART 2: The Life and Death of the American Savage, 1777-1851
II A Melancholy Fact: The Indian in American Life
III Character and Circumstance: The Idea of Savagism
IV The Zero of Human Society: The Idea of the Savage
V An Impassable Gulf: The Social and Historical Image
VI The Virtues of Nature: The Image in Drama and Poetry
VII Red Gifts and White: The Image in Fiction

PART 3: Afterthoughts, 1851-
VIII After a Century of Dishonor: The Idea of Civilization