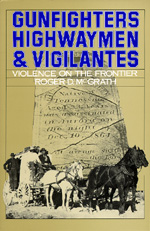 Gunfighters, Highwaymen, and Vigilantes Violence on the Frontier

From the Preface:On the frontier, says conventional wisdom, a structured society did not exist and social control was largely absent; law enforcement and the criminal justice system had limited, if any, influence; and danger--both from man and from the elements--was ever present. This view of the frontier is projected by motion pictures, television, popular literature, and most scholarly histories. But was the frontier really all that violent? What was the nature of the violence that did occur? Were frontier towns more violent that cities in the East? Has America inherited a violent way of life from the frontier? Was the frontier more violent than the United States is today? This book attempts to answer these questions and others about violence and lawlessness on the frontier and do so in a new way. Whereas most authors have drawn their conclusions about frontier violence from the exploits of a few notorious badmen and outlaws and from some of the more famous incidents and conflicts, I have chosen to focus on two towns that I think were typical of the frontier--the mining frontier specifically--and to investigate all forms of violence and lawlessness that occurred in and around those towns.

Roger D. McGrath was a U.S. Marine and history professor at UCLA. He currently is at California State University-Northridge.

"Gunfighters, Highwaymen, and Vigilante is a critical source for anyone looking to understand the larger world of the American West and the underpinnings of society at the time. McGrath's contextual study, while focused on California, is both authoritative and entertaining and deserves a valued place in any library with a focus on outlaw-lawman history."—The Tombstone Epitaph

"What happened at Bodie and other frontier towns is the subject of Roger D. McGrath's Violence on the Frontier, and it is replete with surprises. McGrath takes a sharp look at western violence by comparing community life during the heyday of two California mining camps, Bodie and Aurora. . . .Few if any incidents escaped his keen eye, and he writes with relish about what he found."--Martin Ridge, California Magazine "Why is America so violent? When that question is raised, the old chestnut of frontier heritage is inevitably pulled from the fire. . . .McGrath's valuable book suggests that violence in modern America is rooted less in the conquest of the frontier than in the formation of the modern city. . . . His research produces evidence of a powerful set of shared values that rigorously limited violence to consenting adults."--William Broyles, Jr., New York Times "This handsomely produced book provides a valuable test case in the study of frontier violence and will provide food for thought for many years to come."--Larry D. Ball, Western Historical Quarterly "This is one of the best of a small but growing number of frontier community studies and will offer inspiration and model to other scholars. Its close examination of frontier mining towns yields valuable insights into lives of the men and women who lived--and died--in them. Its concrete assessment of nature of violence and lawlessness in frontier settings not only corrects some past generalizations about frontier violence but also gives historians very useful data to compare with other frontier communities."--John Clendenin Townsend, Magill's Literary Annual

1. The Esmeralda Excitement
2. No Goodee Cow Man
3. Politics, the Civil War, and the Boundary
4. Robbery, Rowdyism, and Combat
5. The Daly Gang
6. The Last of the Old-Time Mining Camps
7. Violence and the Minorities
8. Women, Juveniles, and Violence
9. In Illegal Pursuit of Wealth
10. Rough and Rowdy
11. The Badmen of Bodie
12. Vigilantism
13. The Heritage of the Trans-Sierra Frontier