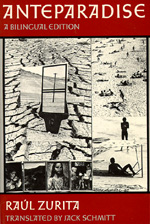 Here is a major work by a Chilean poet thought by many to be the most brilliant and important new voice in the Spanish language. In its first American edition, this poetry is presented in Spanish and Enlgish, so that readers of both languages may listed to Zurita's voice.

Anteparadise can be read as a creative response, an act of resistance by a young artist to the violence and suffering during and after the 1973 coup that toppled the democratically elected Allende government. Zurita thus follows the example of several Latin American pets such as the Peruvian César Vallejo and Chilean Nobel laureate Pablo Neruda, sharing their passion and urgency, but his voice is unique. 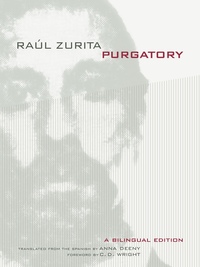