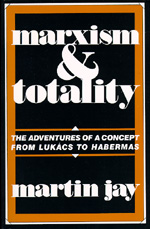 Totality has been an abiding concern from the first generation of Western Marxists, most notably Lukács, Korsch, Gramsci, and Bloch, through the second, exemplified by the Frankfurt School, Lefebvre, Goldmann, Sartre, Merleau-Ponty, and Della Volpe, up to the most recent, typified by Althusser, Colletti, and Habermas. Yet no consensus has been reached concerning the term's multiple meanings—expressive, decentered, longitudinal, latitudinal, normative—or its implications for other theoretical and practical matters. By closely following the adventures of this troublesome but central concept, Marxism & Totality offers an unconventional account of the history of Western Marxism.

Acknowledgments
Introduction: The Topography of Western Marxism
1. The Discourse of Totality Before Western Marxism
2. Georg Lukacs and the Origins of the Western Marxist Paradigm
3. The Revolutionary Historicism of Karl Korsch
4. The Two Holisms of Antonio Gramsci
5. Ernst Bloch and the Extension of Marxist Holism to Nature
6. Max Horkheimer and the Retreat from Hegelian Marxism
7. Anamnestic Totalization: Memory in the Thought of Herbert Marc use
8. Theodor W. Adorno and the Collapse of the Lukacsian Concept of Totality
9. Henri Lefebvre, the Surrealists and the Reception of Hegelian Marxism in France
10. Totality and Marxist Aesthetics: The Case of Lucien Goldmann
11. From Totality to Totalization: The Existentialist Marxism of Jean-Paul Sartre
12. Phenomenological Marxism: The Ambiguities of Maurice Merleau-Ponty's Holism
13. Louis Althusser and the Structuralist Reading of Marx
14. Scientific Marxism in Postwar Italy: Galvano Della Volpe and Lucio Colletti
15. Jurgen Habermas and the Reconstruction of Marxist Holism