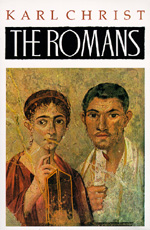 The Romans An Introduction to Their History and Civilization

Roman civilization is one of the bases of the modern world. The extraordinary achievements of Rome—political, military, cultural—and its dramatic, thousand-year history, during which it grew to dominate the whole world of classical antiquity before being overwhelmed in its turn, have been continuously studied and variously interpreted ever since. Rome has been commended for its administration, praised for its system of justice, admired for its arts and technology, extolled for its "virtues," such as love of freedom, independence, discipline, courage, and austerity. It has also been condemned for its aggression, its exploitation of slaves, its excesses, and the decadence that led to its decline. But such was Rome's impact, and so remarkable was the empire it built, that its influence has never ceased to be felt. Whether as a model of political power, of moral behavior, or of social control, Rome with its splendors and triumphs, its failings and disasters, is an inexhaustible quarry for the lessons that its history offers and the legacies that it has bequeathed.

Karl Christ conveys the essence of this vital Roman tradition with a coherence and compact precision that few scholars, if any, have been able to achieve. Following the main chronological developments of Roman history, he combines the necessary minimum of political and military narrative with lucid social and economic analysis, separate chapters of Roman ways of life and law, and wide-ranging coverage of literature, art, science, technology, and religion.

With maps and photographs as well as a specially prepared bibliography for further reading, The Romans is the most up-to-date, authoritative and comprehensive single-volume introduction to the history and civilization of Ancient Rome.