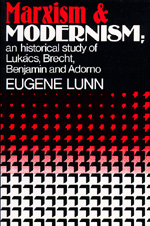 Marxism and Modernism An Historical Study of Lukács, Brecht, Benjamin, and Adorno

"At a time when modernism and Marxism are both under attack as outmoded, Eugene Lunn's rich and detailed study of the years of their most creative interaction reminds us of the still potent energies unleashed by each. We could ask for no more reliable and judicious guide through the complicated debates generated by the struggle to define a viable Marxist aesthetics in the era of the avant-garde. Lukacs, Brecht, Benjamin and Adorno, four masters of the tradition of Marxist cultural theory and practice, are themselves well-served by a contemporary master of intellectual history."--Martin Jay, University of California, Berkeley "Lunn examines the relations between Marxism and modernism as they appear in the careers of four figures who were representative of diverse orientations and possibilities within each .... Their debates and confrontations, both actual and implied, reveal many facets of the modernist movement, and of Marxism as it has developed in the twentieth century. Lunn provides an excellent and valuable account of this important and compelling subject. His book is solidly informed, insightful, imaginative, and thought-provoking."--Jerrold Seigel, American Historical Review "Lunn expertly constructs the major part of his book around two axes, the so-called Brecht-Lukacs debate and the Adorno-Benjamin debate. Even here, however, Lunn manages to compare each member of these two dyads with each of the others, so that a subtle, many sided discussion of contrasts and similarities results. . . All in all, this is an excellent work--to my mind the best condensed treatment of the confrontation between Marxism and modernism that exists in any language."--David Gross, Telos "Unerringly intelligent and judicious, the book provides economical accounts of the careers and theories of its chosen critics, places them in historical context, and prefaces them with brief but cogent surveys of Marx's own fragmentary aesthetics and of artistic modernism. . . . Marxism and Modernism offers a splendidly well researched and amenable study of the most fertile developments in Marxist aesthetics."--Terry Eagleton, Journal of Modern History

PART ONE: TRADITIONS
1. Art and Society in the Thought of Karl Marx
2. Modernism in Comparative Perspective

PART TWO: LUKACS AND BRECHT
3. A Debate on Realism and Modernism
4. Paths Toward a Marxist Aesthetics
5. Stalinism, Nazism, and History

PART THREE: BENJAMIN AND ADORNO
6. Avant-Garde and Culture Industry
7. Benjamin and Adorno: The Development of Their Thought
8. Marxism Much Revised
9. Modernist Alternatives 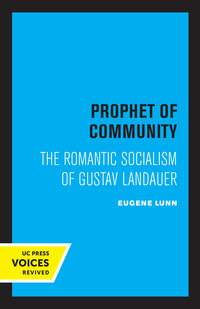