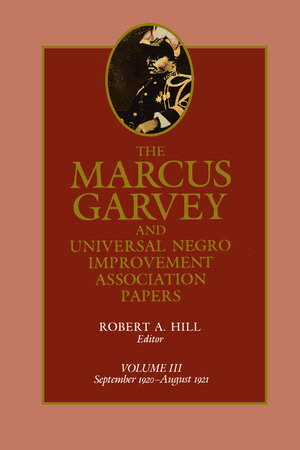 This is the third volume of Robert A. Hill's massive ten-volume survey of Marcus Mosiah Garvey and the extraordinary mass movement of black social protest he inspired. Hill brings together a wealth of original documents-speeches, letters, newspaper articles, intelligence reports, pamphlets, and diplomatic dispatches--to provide a record of the period between the first and second international conventions of the Universal Negro Improvement Association. The success of the August 1920 convention, as documented in Volume II, justified Garvey's expanded emphasis on African redemption and established his movement's substantial following in black communities around the world. And by the time of the August 1921 convention, the UNIA was the major political force among blacks in the postwar world. As Volume III reveals, however, there arose signs of crisis in the movement. Garvey's lieutenants began to doubt both the financial health of the Black Star Line and the wisdom of Garvey's methods of raising money for his Liberian colonization and trade scheme. Soon the entire Black Star Line enterprise hovered on the brink of bankruptcy and a steep decline in the shipping business made prospects for the Black Star Line even less promising. But Garvey capitalized on the momentum gathered at the August 1920 convention and spent much of his time in a new round of promotional tours devoted to selling Black Star Line stock, shoring up weak UNIA divisions, and chartering new ones. This gave J. Edgar Hoover his long-awaited opportunity to remove Garvey from the Afro-American political scene. When Garvey embarked on a promotional tour of the West Indies and Central America in February 1921, the United States government, with some assistance from the British, attempted to keep Garvey from returning to the country. Garvey's trip was to mark a turning point in the history of the UNIA. Garvey's lieutenants, who were charged with running the UNIA during his absence, frequently clashed over unclear lines of authority. This also created severe difficulties for the Black Star Line and the UNIA's Liberian project. Under these circumstances, Garvey asked for and received, from the 1921 convention, control over all UNIA and Black Star Line finances as a means of centralizing all authority in his hands. At the same time Garvey launched an attack at the convention against those black leaders, including W. E. B. Du Bois, whom he perceived as opponents of the UNIA. He further initiated a controversial campaign to label these political opponents as advocates of "social equality" between the races, while offering as an alternative his philosophy of "racial purity." This volume is the third of six that focus on America; the seventh and eighth focus on Africa, and the last two on the Caribbean. In Volume III, Robert Hill documents the complexities and turmoil of the Garvey movement from 1920 to 1921, as an unfolding drama emerges that pits American and European political, diplomatic, and economic interests against the first comprehensive expression of the modern black struggle for freedom.

Robert A. Hill is director of the Marcus Garvey and Universal Negro Improvement Association Papers Project in the African Studies Center at the University of California, Los Angeles, where he is also Associate Professor of History.