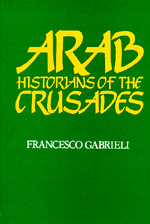 Arab Historians of the Crusades

The recapture of Jerusalem, the siege of the Acre, the fall of Tripoli, the effect in Baghdad of events in Syria; these and other happening were faithfully recorded by Arab historians during the two centuries of the Crusades. For the first time contemporary accounts of the fighting between Muslim and Christian have been translated into English, and the Western reader can learn 'the other side' of the Holy War.

Seventeen authors are represented in the extracts in this work, which have been drawn from various types of historical writings. The excerpts are taken firstly from the general histories of the Muslim world, then from chronicles of cities, regions and their dynasties, and finally from biographies or records of the deeds of certain persons. The Arab histories of the Crusades compare favorably with their Christian counterparts in their rich accumulation of material and chronological information. Another of their merits is their faithful characterization, which they practiced in the brief but illuminating sketches of enemy leaders: Baldwin II's shrewdness, Richard Coeur de Lion's prowess in war, the indomitable energy of Conrad of Motferrat, Frederick II's diplomacy. The chronicles are generous, naturally, with their praises of the great champions of the Muslim resistance, especially of Saladin, who towers above all the other leaders in heroic stature. Although, this book gives a sweeping and stimulating view of the Crusades seen through Arab eyes.

Part One: From Godfrey to Saladin
Part Two: Saladin and the Third Crusade
Part Three: The Ayyubids and the Invasion of Egypt
Part Four: The Mamluks and the Liquidation of the Crusaders